Rawlings welcomes ICC ruling on Gbagbo; says France and others ‘wasted his life’

17
SHARES
142
VIEWS
Share on FacebookShare on TwitterShare on Whatsapp

Former President, Jerry John Rawlings believes the exoneration of Ivory Coast’s ex-President Laurent Gbagbo marks a new beginning for Ivoirians while blaming France and its western allies for his incarceration.

According to him, the latest development affords the citizens an opportunity to be united for the development of their country.

On Tuesday, the International Criminal Court (ICC) in The Hague acquitted Laurent Gbagbo after he had been charged with crimes against humanity in connection with violence following a disputed 2010 election that left 3,000 dead and 500,000 displaced.

He was the first former head of state to go on trial at the ICC.

ICC judges ruled that he had no case to answer because the prosecution had not managed to prove several charges against him.

They have ordered his immediate release.

Presiding Judge Cuno Tarfusser said the prosecution had “failed to demonstrate that public speeches by Gbagbo constituted ordering or inducing the alleged crimes”.

Mr. Gbagbo’s supporters whooped, cheered and threw their firsts in the air in the public gallery following the announcement, the BBC’s Anna Holligan reports from the court.

In a tweet after the ruling, Mr. Rawlings described Laurent Gbagbo as a ‘true African patriot’ and intimated that, although his colleague former president did not have to undergo those times of difficulties,  the freeing should rather spur on the people of Cote d’ Ivoire to bring an end to any form of divisions that might have existed among them.

“A true African patriot is free. Laurent Gbagbo, despite his human weakness, did not deserve to have eight years of his life wasted by the machinations of France and Sarkozy, and their Western allies.  I hope this will serve as a new beginning for Cote d’Ivoire –a source of unity, not division; strength, not weakness!”

He further called on Africans to pay the needed respect to all patriots who have fought for the liberation of the continent.

“While we celebrate, let us remember all who have sacrificed their lives for the true emancipation of Africa, our continent.” 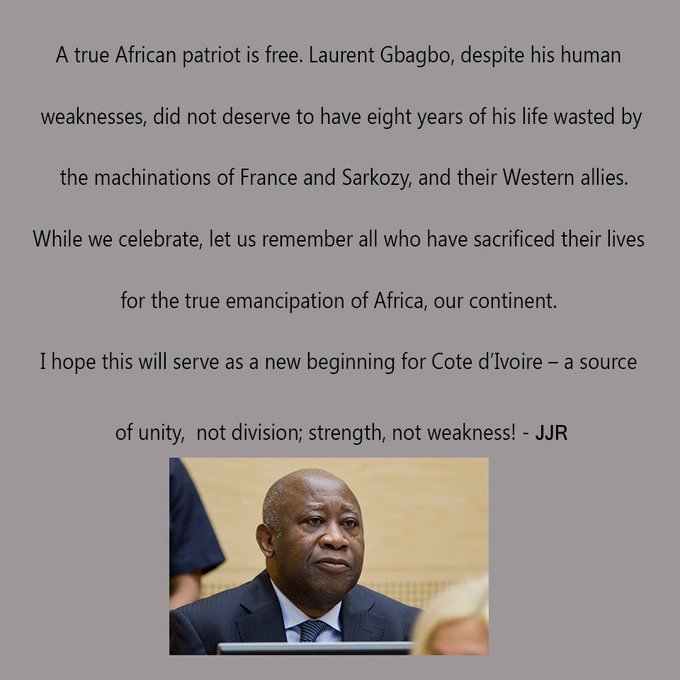 A true African patriot is free…

What allegations were leveled against Mr. Gbagbo?

The violence in Ivory Coast, the world’s biggest cocoa producer, came after Mr. Gbagbo refused to accept that he had lost a disputed election run-off to Mr. Ouattara in 2010.

Mr. Gbagbo was captured in 2011 in a presidential palace bunker by UN and French-backed forces supporting his rival, Alassane Ouattara.

The five months of violence that followed were described as some of the most brutal clashes the country had ever seen.

During the political stand-off there were bloody clashes and targeted killings in Abidjan in the south, and several hundreds were massacred in the western town of Duekoue.

Prosecutors accused Mr. Gbagbo of four counts of crimes against humanity, murder, rape and other forms of sexual violence, persecution and “other inhuman acts”.

He denied the charges, which he said were politically motivated.

Analysts say the development is a blow to the ICC’s reputation.

“Whenever a case involving mass atrocities essentially collapses at the ICC, it does damage to the perception of the court as a credible and effective institution of international justice,” Mark Kersten, author of Justice in Conflict, told the BBC.

“Many are concerned that the court is emerging as an institution where only rebels can be successfully prosecuted,” he added.

Ghanaian arrested for alleged murder in the U.S.

Elon Musk Found Not Guilty Of Fraud Over Tesla Tweet

A Million Gather To Hear Pope’s Mass In DR Congo

Ghanaian arrested for alleged murder in the U.S.